representational: Health officials during their door-to-door visit in Khanyar locality to check the neighborhood for symptoms of coronavirus, in Srinagar. 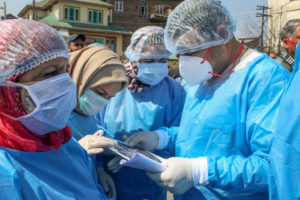 The number of novel Covid-19 cases in Union territory of Jammu and Kashmir continue to witness a spike since past 24 hours making the matters worse for authorities and adding to the anxiety among people.

On Sunday, five more persons tested positive for the disease in Kashmir, taking the total number of cases across Jammu and Kashmir to 38.

A day before, 15 people, 10 from Kashmir and five from Jammu tested positive for Covid-19. A steep rise in such cases has added to the panic among people.

More than a billion people in India are under a lockdown since Tuesday in an unprecedented effort to contain the spread of virus.

The lockdown which will remain enforced for 21 days has rendered lakhs of workers in informal sector jobless and put them to starvation like conditions, media reports said.

Jammu and Kashmir apparently is not an exception with streets deserted and shops shuttered becoming a common sight across the union territory.

Manual workers who worked round the clock for survival are sitting idle. A large number of people have been running out of cash and essentials although the administration has ordered banks, ATMs and many other essential services like grocery shops to remain open.

“Many people like me who work during the day to feed family in the evening are facing horrible times due to lockdown,” said Javid Sheikh, a street vendor selling fruits in Kupwara.

“I am worried how to feed the children in coming days. The government though has announced some ration and relief for poor people but I don’t think it is sufficient for survival,” he added.