Curtain Raiser had published a report yesterday showing pictures in which people were seen brazenly violating social distancing in a desperate attempt to collect cash at the branch.

Some locals hailed the authorities’ move.

“The locals were involved in a mad race to collect cash. This was posing serious threat to the health of people and bank officials,” said Mohammad Ramzan, a Villgam resident

“Kupwara DC acted promptly and ordered closure of branch for now. It is a good step, indeed, in the larger interests of people,” he added. 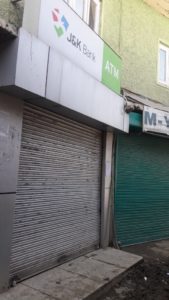 A bank official at the branch said that DC has asked them to keep the branch closed till further orders.

“We even tried our best to attend customers area-wise. But they still created large gatherings making extremely difficult for police and bank management to regulate the rush,” he added.

Kupwara: Is this threatening crowd thronging bank immune to Coronavirus?