Forced to take classes in choked and dingy classrooms, students of Primary school (SSA) Pir Mohalla Dolipora Trehgam in Kupwara district and their parents have threatened to withdraw admission, if authorities did not shift them to a new school building.

The school is housed in a muddy old house lacking ventilation. What poses grave health hazards to students and teachers is the stink emanating round the clock from a cowshed barely a few meters away from the school.

UPI running over the humble toffee? Not quite

To make the matters worse, the school lacks toilet facility. The poor infrastructure has forced around a dozen students to withdraw admission leaving behind 23 students stare at a bleak future, at present, teachers said.

“Cow dung is so stinky that it is literally difficult to breathe especially in the morning. We feel like struggling for oxygen in choked and dingy classrooms, which lack sufficient ventilation,” said a 5th grader. 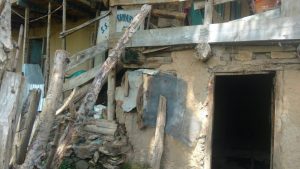 “The authorities should shift us to a new school building else we will be forced to get discharge certificates from this school and seek admission in other schools. Many students are falling sick due to prevailing unhygienic conditions here,” he added.

Parents too voiced their concerns.

“Children are not only staring at a bleak future here but are also becoming vulnerable particularly to chest infections due to cow dung around them,” Mushtaq Ahmad Pir, a parent said.

“Sadly despite in of know this, the Chief Education Officer Kupwara continues to make children and teachers suffer by ignoring the problem. We will be forced to withdraw admission of our wards if school was not re-located at the earliest,” he added. 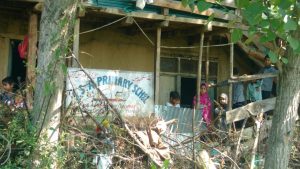 The school building in the village was partially damaged due to snow in February this year and has not been repaired so far.

“It may not require lakhs of rupees to repair the school but only around Rs 60000 to make it fit for students and teaching staff. But despite repeated representations, the CEO has not released the funds for its repair,” said a teacher, while claiming that the teachers had been paying rent of the school building from their own pockets.

CEO Kupwara Mohd Shafi War said, “The damaged school building will be repaired on priority basis and school re-located. I appeal parents and children to cooperate with me for a little more time to enable me address the issue,”