Kupwara:  A human intervened fire, which engulfed Kalaroose forests in north Kashmir’s Kupwara district on Friday, has been brought under control to a large extent after hectic efforts by forest officials, a senior forest official said on Sunday.
A few suspects, who are also involved in damage to forest are believed to be behind the fire to the natural resource. A case would be lodged against them soon, he added.
“The fire has been brought under control largely due to round the clock efforts of forest officials. It would be completely doused by Monday afternoon, I am hopeful,” Zahid Moghal, Divisional Forest Officer, told Curtain Raiser, Sunday evening.
“The fire was caused due to human intervention and we will lodge a case against the suspects. Three suspects against whom, we had lodged a case of ‘damage to forest’ last week most likely initiated the fire, not far from their homes.” he added.
The senior forest official, who supervised the fire fighting operations in affected compartment Nos-  56, 96 and 97 regretted that despite appeals for help over public address system, locals did not come forward.
“The locals choose to ignore the fire and insteads shared pictures of the same on social media. We made appeals for help on masjid loud speakers too, but they ignored.,” he added. 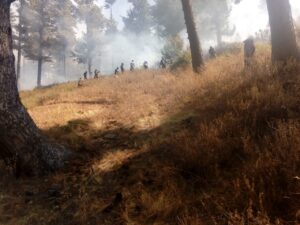 Local army unit helped the officials in fire fighting operations by providing fire extinguishers, Moghal said.
Since Friday more than 100 forest employees of Kamraj Forest Division are working round the clock to put the fire off. In absence of modern fire fighting gadgets, the forest men dig fire lines in the affected areas to douse flames and prevent the spread.

What made the matters worse is the fact that the fire quickly intensified in Kail dominated forest posing grave challenges to the ground staff and officials but they did not give up and have been able to douse the fire to a large extent, the senior officer said.

“We called off operations 7 PM, this evening. But it will be resumed in the morning. The fire will be completely put off by Monday afternoon,” DFO hoped.
Previous Post