Kupwara: Residents of Darpora-A in Lolab valley of Kupwara district are living in constant fear of landslides for past 15 years due to a stone quarry being allegedly operated illegally, not very far from human habitation.

Fearing for their lives and property, the locals recently made a representation to Sub-Divisional Magisterate (SDM) Lolab seeking closure of quarry, which they claimed was operating illegally on the forest and state land.

Atmosphere of Change visible in J&K, Youth to be drivers of Progress: Lt. Guv

“The stone quarry is posing a grave danger to human lives and livestock too, as a major portion is hillock threatens to collapse due to soil erosion,” said, a local resident.

“We made representations to Geology and mining department too, seeking its’ closure but for past 15 years, we are made to run from pillar to post apparently to no avail,” he added. 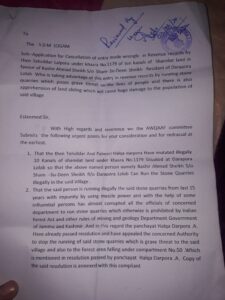 Some locals regretted that Geology and mining department was hand-in-glove with the quarry operator and hence not taking action against him- a charge denied by the district mining officer.

“We will be forced to hit the streets in protest, if the authorities did not seal the site for all sorts of operations. We are living in constant fear of landslides damaging our property and even causing casualties but the department chooses to ignore our sufferings,” said, Mohd Jabbar, a local resident.

The local Auqaf committe in its’ representation to SDM also sought cancellation of mutation of ten kanals of land bearing Khasra No. 1179 (a copy of which is with Curtain Raiser).

The representation claimed the said land (10 Kanals) falling under forest compartment No. 50 has been illegally mutated in favour of Bashir Ahmad Sheikh, who operates the stone quarry on forest and state land. 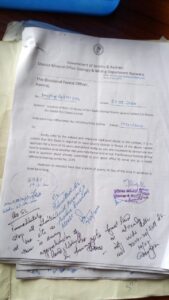 “That the then Patwari and Tehsildar Lalpora have illegally mutated 10 Kanals of Shamlat land under Khasra No 1179, in favour of Bashir Ahmad to benefit him,” reads the representation made to SDM.

“The said person is running stone quarry illegally for past 15 years with impunity by using muscle power and rapport to influence officials of mining department and others for his own vested interest,” it adds.

The locals said that to mislead them and authorities’ as well, the quarry operator was carrying operations early in the morning and evening, when most of local inhabitants stay indoors.

“We have sealed the site for all sorts of operations on July 26, after last consignment was despatched from the site as per auction of the dumped material,” he told, Curtian Raiser.