Kupwara: A man and his two sons were arrested and a private car allegedly used to smuggle cow was seized from them in Kupwara, a police official said on Monday.

The accused who had allegedly stolen a cow from Gushi village were held in Nagri by a police team along with cow and car bearing registration number DL3CAQ- 8533.

Atmosphere of Change visible in J&K, Youth to be drivers of Progress: Lt. Guv

“They put a stray cow in Santro car and managed to flee away from Gushi. However an eyewitness informed local police station and they were arrested in Nagri village,” said, Sarpanch Gushi, Mohd Ashraf

The incident has left locals shocked. 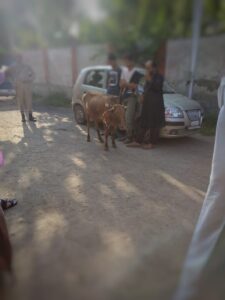 FIR No 205 of 2020 under section 379 of IPC has been lodged against the trio. and investigations set into motion, he added.

In the past many such incidents of livestock-smuggling have taken place in the area, according to locals.

The cow was later handed over to its owner, who police identified as Ab. Ahad Akhoon of Gushi, KupwaraL

Locals hailed the swift action of police in capturing the cow thieves and hoped that it may put an end to smuggling of animals in the area.