SRINAGAR: Listen to them and you would be stunned. They found dead insects in tea, which they were made to drink at Radha Swami Ashram Vijaypur in Samba district of Jammu region on Friday.

And when they complained about the same and threatened to go on hunger strike in protest, they were lathi-charged by police Friday evening, they said.

Rumor-mongers in the garb of reporters

This is not all. Stale food is what they have to eat to survive here and they are not even provided with soap to wash hands. 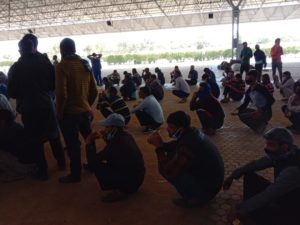 As many as 950 people mostly from Kupwara district have been kept at this Ashram since March 25. These people including children and women (A few of whom nearing their delivery time reportedly) were heading home, when police halted them at Lakhanpur on March 25, in wake of Covid-19 spread and took them to the Ashram to complete 14 days quarantine period.

Fair enough. Quarantine is mandatory for everybody having a travel history to undergo quarantine.

But people kept here said this place (Ashram) has become a living hell for them. Curtain Raiser is in possession of a few pictures and a few videos in which dead insects can be seen in a cup of tea, which authenticates their claim.

“We are treated like animals here. After we found dead insects in tea, we decided to go on a hunger strike in protest. The policemen abused us and lathi-charged to keep us silent,” said Reyaz Ahmad Bhat from Kalaroose town of Kupwara district.

“They give us days’ old stale food to eat and do not even provide us soap or enough water to take a bath. We are herded like a flock of sheep here and made to sleep on the ground.,” he added.

People kept here said that they were willing to stay here for more than stipulated 14 days but they should at least be provided with basic facilities to survive.

Most of them stuck here are ordinary people, who do some businesses or daily labour in Indian cities for months for their survival before returning to their homes. 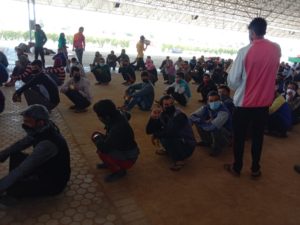 In the wake of Covid-19 spread, they had to leave their respective places and head home.

“Writhing in pain, when we somehow took a boy to a nearby medical store for medicine. Shockingly the chemist gave him medicine meant to intensify labour pain of women. The boy suffers from hernia and needed immediate medical attention,” claimed Aijaz Ahmad, who also belongs to Kupwara district.

These people appealed to J&K Lt. Governor and District Magistrate Kupwara to intervene and ensure they were treated like humans and at least provided basic facilities.

“We are becoming increasingly vulnerable to infection, which could be deadly than Covid-19. Imagine the risk to our health, when we are fed days old stale food and dead insects in tea. Not only this, but we are also forced to sleep almost one over other amid in this choked space” said Dilawar Mir.

“We make a fervent appeal to Lt Governor and Kupwara DM to make basic arrangements at the Ashram or send us back home without dealy,” he added.

Rohit Kansal, a government spokesman told ‘Curtain Raiser’ that he will ask concerned District Magistrate to visit the Ashram and examine. “Concerned DM will definitely take a note of it,”  he added.