KUPWARA: Look at this ugly scene (pictured above) and you will be stunned. This is not a garbage dumping site but this huge heap of garbage is lying scattered just at the bank of Nallah Lolab, not far from otherwise crowded Lolab Sumo stand and Kupwara main township.

Tonnes of garbage is almost flowing into the water body, which is a major source of potable water and irrigation to thousands of Kanals of land. It also badly chokes the flow of water.

VIDEO: Why was he killed in cold-blood? Asks slain Budgam youth’s father

The stink emanating from this garbage forces passer-byes and even those travelling along side the bye pass road leading to Lolab, cover their faces for obvious reasons.

It threatens of an outbreak like Cholera and Hepatatis A or E, say some locals, expressing disgust over the mishandling of garbage by the Kupwara municipal committee.

Even the Jal Shakti department expresses displeasure over sheer negligence of Kupwara Municipal Committee blaming it of polluting the water bodies particularly Nallah Lolab, and threatening its’ survival by continuously dumping truckloads of garbage on the bank of Nallah.

“Water is a  precious natural gift, which must be prevented from any type of pollutants. But sadly due to the negligence of local municipal committee, few water bodies have become extremely polluted,” Tawseef told Curtain Raiser. 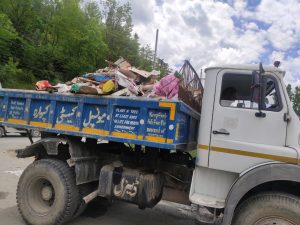 Interestingly, heap of garbage lying scattered at the bank of Lolab Nallah, which flows almost thorough the middle of Kupwara town, is not very far from Kupwara Deputy Commissioner’s office as well.

“Department of Jal Shakti has many times written to MC Kupwara asking it not to dump solid waste – polythene, plastic, cow dung and rags on the bank of Nallah Lolab but it has always ignored our request and continues to dump heaps of waste near the water body,” said AEE Jal Shakti.

The garbage makes water unfit for domestic use and irrigation streams also get chocked due to accumulation of waste, according to officer.

“Despite written communications and verbal directions too, we have not seen positive response from Kupwara municipal committee. As a result of their negligence, water bodies have witnessed high levels of pollution and are facing a grave danger,” said Tawseef.